October is the anniversary month for my beloved blog, History & Wine. I could never have imagined from the moment of inception that this personal “creative project” would make it a year with over 100 posts, or so quickly be chosen as a WordPress “Freshly Pressed” blog. However, I am extremely grateful for all the people who have helped me promote the blog, my (now over 1200) followers, and even those of you who check-in every once in a while. Though the format has changed considerably since the first post, the change was most definitely for the better. My original intention for this platform was to simply drink wine while I wrote a lesser-known history story and “see what happens.” Fate, however, had a different idea for the direction of the blog…

So, in honor of the first anniversary of History & Wine, I thought I would take a look back at some of my favorite posts over the past year.

*I will do this over several posts, so stay tuned! 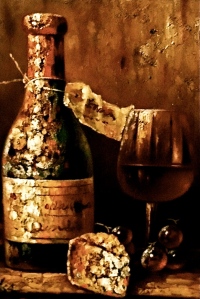 Of course, I have to start with my “First Post, Close to Home,” the brief article I wrote about Virginia wine country. It only seemed natural to begin my blog called “History & Wine” with a post about the history of Virginia wine. At the time that I was writing the post, I was living in Arlington, VA, and I had the luxury of spending the weekends exploring the beautiful foothills of Northern Virginia wine country. I enjoyed doing a little research for this piece, and I loved writing it. I believe that I was actually drinking wine as I wrote, and I think that came across in some of my silly quips.

My blog shifted slightly after the death of my aunt in late October last year. I decided to focus a little more on family history by publishing several essays that she had written to me over the course of a few years. I thought this would be an appropriate way to memorialize her, as she was a writer throughout her life. I believe that everyone has a “history,” and family history is one of the most important legacies that we carry with us. Therefore, I utilized the platform of my blog to share some of that with you.

Around Christmas time, I used my blog as a soapbox to petition the release of former Marine, Jon Hammar, from the deplorable conditions of a remote Mexican prison. You may or may not remember the story of a young Marine, who served in the current Middle East conflicts, who was taking a road trip into Mexico in order to go surfing. (As he rightfully earned a trip.) He carried an antique shotgun with him—for hunting and protection. While on the American side of the border, he lawfully asked border agents for the proper paperwork and procedure in order to bring the weapon across the border. They informed him that he needed to register the gun once he crossed the Mexican border. Unfortunately, as soon as he tried to do that by approaching Mexican authorities about the gun, he was arrested for no apparent reason, and promptly thrown in a crime-ridden Mexican prison for months. I, along with many others, found this situation absolutely disgusting on the part of the Mexican authorities. What was even more unacceptable was that our government remained silent for so long.  Being from Miami, Jon had a small group of very loud supporters who put up a serious fight. With the help of Congresswoman Ileana Ros-Lehtinen, and Senator Bill Nelson from Florida, Jon received national media attention, and the US State Department felt the heat. He was released, in perfect Christmas miracle fashion, just in time to spend the holidays safely with his family.

Last spring, I made the goal to try to post every single day. For those of you who blog regularly, you know how difficult it is to come up with a new topic each day. I challenged myself to create ideas of my own, but I also used the help of the WordPress Daily and Weekly Challenges. This turned out to be one of the better ideas that I had for the blog. One particular Weekly Challenge proved to be the single most successful post on my blog, simply because it was chosen as a WordPress Freshly Pressed post. For those of you who do not know what that means, it is an “award” given by WordPress to promote bloggers and posts that are deemed well written and insightful. The post that was chosen from my blog was called, “Drawing the Line on Government Intervention.”

Being of a political background, oftentimes I can’t refrain from sharing my (educated) opinion about certain issues. Government intervention in any part of private life is something that causes me great frustration, especially because our founding fathers fought so hard against that kind of rule. I let some of my angst out through this post, with no idea whatsoever that it would be seen by anybody. Well, folks, that post still pops up almost everyday with new views or likes, thanks to the Freshly Pressed award.

Jacqueline Coleman is a 4th-Generation Miamian, professional wine + travel writer, wine consultant, and wine judge for the American Fine Wine Competition & Key Biscayne Wine & Food Festival. She is the monthly "Vino" columnist for Biscayne Times, writes a quarterly wine column for the Miami-based foodie magazine, Let’s Eat, and is the "Through the Grapevine" wine contributor and consultant for South Florida Luxury Guide magazine. She is also a regular contributor to the Coravin company wine blog and Winetraveler.com. A lifetime student of history and wine, Jacqueline has a passion for exploring the local cultural and culinary heritage and flare of her unique city. She received her formal wine education at the U.S. Sommelier Association, FIU Institute for Hospitality and Tourism Wine Program, The French Wine Society, and the International Sommelier Guild. You can follow her wine tasting events around South Florida, personal stories, travel adventures, and musings about the "wine lifestyle" on her blog, History & Wine (www.historyandwine.com). View all posts by historywino